The meeting was, once again, well attended and packed with fun and information.

The latest block exchange were 9 patch blocks in Halloween colors. Allison and Angela won the blocks , which they divided up into Halloween and Fall groups. People did really creative things with the 9 Patch grid and there were a lot of purple and bright green in addition to the normal orange and black. 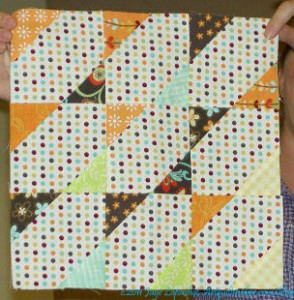 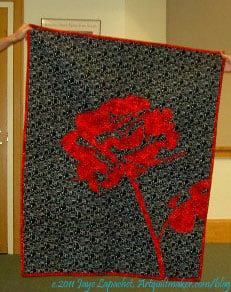 Local quilt work is really good, in general, and the BAMQGers work is no exception. Angela, in particular, is really taking off in terms of work. I do know that she took a class in reverse applique called Stencil Quilting by Dan Rouse at New Pieces in Berkeley. There will be another class in December. Angela said that this technique was different from traditional reverse applique’. I really am excited that Angela is trying new things and really pushing herself in her quilt work.

Her Kona Challenge quilt was accepted into the New Quilts for Northern California along with my quilt, the Zig Zaggy quilt.

The next challenge will be with a line called Heirloom. This is a guild sponsored challenge. Adrianne was going to hand out fabric, but the block the group voted on required some solids, which people wanted to coordinate, so there was a little back and forth about that. The Board decided to wait so they could decide what to do about the solid. The fabrics, barring unforeseen circumstances, will be handed out next month to paid members. 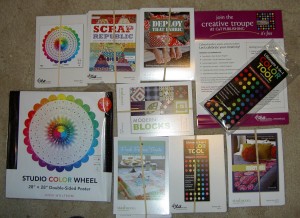 Upcoming:
-Giveaway for Elizabeth Hartman’s book “The Practical Guide to Patchwork”. Members must add content to the Flickr group and Facebook page to be entered.
-Heirloom block challenge
-E block due in November for A-B-C (A-Z) challenge
-Habitat challenge due in November
-Guild elections
-volunteer positions available, please see Adrianne
-Scrap Art Show at the San Jose Museum ends on Oct.16. Jaye and Rhonda have quilts in this show.
-Intrepid Thread Julie was interviewed on the Quilter in the Gap podcast.