Claire told us that the 501(c)(3) paperwork has been put in. That is a ton of work and GREAT news.

There was a prize drawing for the UFO Challenge and I won a spool of Aurifil thread! Yay! I can totally use that. There is a super prize in January and I can’t wait to see what that is. I hope I don’t have to be present to win as I can’t make that meeting. 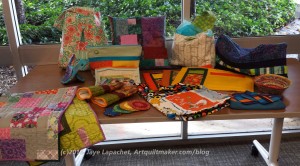 The Holiday Swap was awesome. The gifties were much to be admired.

I didn’t take a picture of the food, but the committee did an awesome job. There are now five of us who eat a GF diet, so there were plenty of GF goodies of which to partake. I had some yummy chocolate thing that Claire made. Yay for chocolate!